Times Square is filled with multiple billboard signs, various theaters from Broadway along with bright, animated neon and LED signs that operate round the clock. There’s so much to Times Square: shopping, restaurants, TV studios, the New Years Eve Celebrations, and the many many people.

Located on the intersection of Broadway and Seventh Ave, Times Square is sometimes known as the ‘Crossroads of the World‘. This iconic New York City attraction is filled with multiple billboard signs, various theatres from Broadway along with bright, animated neon and LED signs that operate round the clock. There’s so much to Times Square: shopping, restaurants, TV studios, the New Years Eve Celebrations, and the many many people. The theatres of Broadway and the huge number of animated neon and television-style signage make it one of New York’s iconic landmarks in the world.

Situated in the borough of Manhattan, at the intersection of Broadway and Seventh Ave, Times Square extends from West 42nd Street to West 47th Street. The Theatre District, which is an extension of Times Square, stretches from Sixth to Eight Avenue. The Theatre District includes a mixture of legitimate theatres, movie theatres, night clubs, restaurants, souvenir shops and bars. Several large International companies use Times Square as a promotional platform. Important International companies such as Coca-Cola, Toshiba, Panasonic and Samsung all have billboard advertisements at Times Square.

The area, formerly known as Longacre Square became Times Square in 1904. It was named Times Square after the New York Times building which was the cornerstone of the district for several years. At the start of the first World War, Times square was the center of the Theatre district and attracted a large number of visitors. This made the square an ideal place for billboards. In 1917 the first large electric display billboard was installed. 11 Years later, the first running electric sign was used for the first time, to announce Herbert Hoover’s victory in the Presidential elections. Since then, billboards have become such a tourist attraction for the area, that the zoning now requires the buildings to be covered with billboards! Times Square has many nicknames, including “The Great White Way” and “The Crossroads of the World”.

Along with being a world-renowned landmark, Times Square is also an important financial district in New York City. There are plenty of commercial landmark buildings along with massive billboard advertisements that run 24 hours a day. ABC Studios also films its daily show Good Morning America directly from Times Square at the ABC’s Times Square Studios. Various International financial firms and media firms are also located in Times Square.

There are no words that can describe Times Square. Arriving at Times, Square, you are greeted by large billboards where lights are flashing, there are people every where and the entire area just looks chaotic. It’s abundant with neon lights and advertisements, busy traffic and hundreds of the famous yellow taxis! But with all this action, Times Square is still one of the safest areas in New York City. There are plenty of policemen around to make you feel safe and secure. But due to its popularity with tourists, Times Square is a place where you need to be careful and vigilant while visiting. There are plenty cases of pickpockets, so keep your wallet and money in a safe area, preferably in a front pocket or the inside pocket of your coat. Also keep in mind that Times Square can be sometimes quite crowded and packed with tourists.

Times Square is one of NYC’s must-see attractions, particularly at night. This iconic landmark is also at the top of New York City’s must-do free activities. Times Square is known as a famous New York City Symbol all around the world. It is estimated that 500,000 people pass through Times Square every day, with half of them, 250,000 being tourists. Another 10 million viewers see live images of Times Square through nationally televised programs every day. 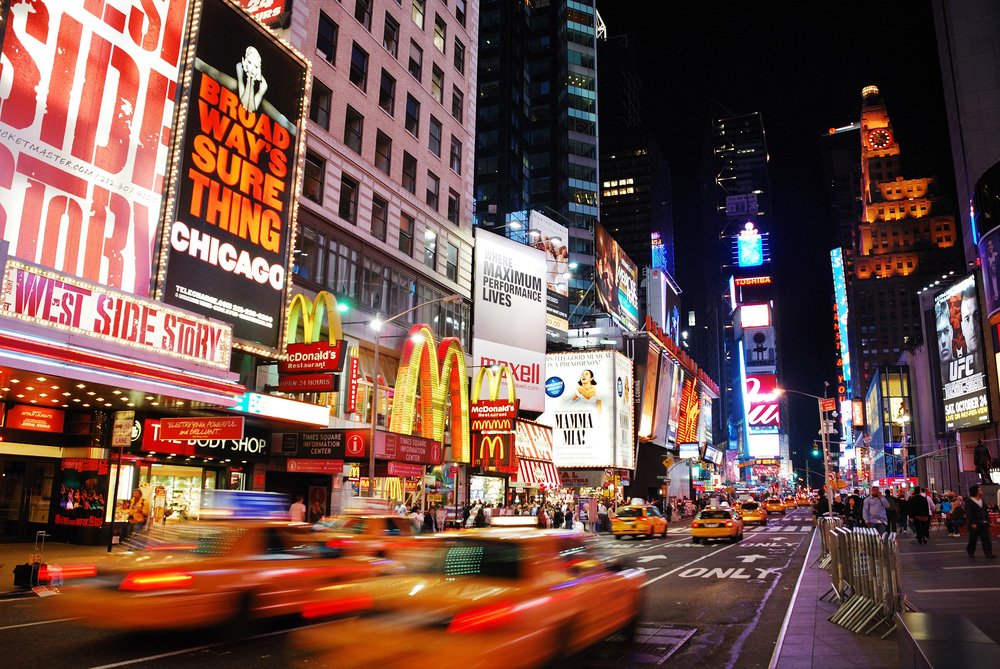 Make sure to see Times Square at night. There is nothing like seeing all the lights at their brightest.