Connecting Manhattan and Brooklyn, this mile-long icon of NYC was engineered by John Roebling and his son, Washington. Both father and son sustained fatal and near-fatal injuries during the construction of the bridge. The Brooklyn Bridge opened on May 24, 1883, after 14 years and 27 construction-related deaths. This marked the first time in history that the boroughs of New York and Brooklyn were connected over the East River. The dedication ceremony for the Brooklyn Bridge was witnessed by thousands of Brooklyn and Manhattan Island residents. On the opening day, a total of 1,800 vehicles and 150,000 people crossed what was then the only land passage between Manhattan and Long Island. The bridge’s main span over the East River is 1,595 feet 6 inches (486.3 m). The bridge cost $15.5 million to build and approximately 27 people died during its construction. Work on the bridge began in 1867, it was finally completed in 1883 and designated a National Historic Landmark in 1964.

Today, the Brooklyn Bridge channels thousands of vehicles, bikers and pedestrians between Brooklyn and Manhattan day and night. The panoramic views of Lower Manhattan from this nearly 150 year-old engineering marvel is reason enough to walk across the bridge.

Along with 6 lanes designated for motor vehicles, the bridge has a wide pedestrian walkway that is open for bicyclists and walkers. Walking across the Brooklyn Bridge is one of New York city’s top must-do free activities. Walking across the Brooklyn Bridge gives you an up-close look at its intricate construction and provides unparalleled views of the New York City skyline. The views from the bridge are simply spectacular! From the bridge, you can also see the Statue of Liberty and the many boats coming out of Pier 17 to take a cruise near the statue. The walkway of the Brooklyn Bridge is a raised wooden strip down the center of the bridge, higher than the automobile lanes. The walkway is shared between pedestrians and cyclists. There is a lane marked for pedestrians and a lane marked for cyclists. The walk is quite noisy, with load sounds from the NYC traffic below, so don’t expect be able to hang over the side to look at the East River beneath. But the views back to Downtown and Midtown Manhattan are fantastic. Walking the entire bridge back and forth, at a comfortable pace takes about 1 hour one way. Once you’ve crossed the bridge, there is nothing better than experiencing an authentic New York City pizzaria. One of NYC’s top pizzarias, Grimaldi’s, is located at the foot of the bridge, near the river, on the Brooklyn side. This popular pizzeria is casual, inexpensive and usually quite busy.

Of the many bridges that link Manhattan to the mainland, the Brooklyn Bridge is the best known and one of the most attractive. The Brooklyn Bridge’s most recognizable feature are the two masonry towers at the center of the bridge. The towers are 276 ft tall (84 m). The designer of the bridge, Roebling, claimed that these two towers would make the bridge stand out as an historical monument.

From Downtown Manhattan, the bridge is next to City Hall and the courthouses, just north of the Financial District. The Manhattan side of the bridge is accessible from the Brooklyn Bridge/City Hall subway station (served by the 4,5, and 6 Trains), Chambers Street (J, M, Z), or City Hall (R,W); while the Brooklyn side is close to the High Street subway station (served by the A and C Trains). Each year, over a million people visit the Brooklyn Bridge. 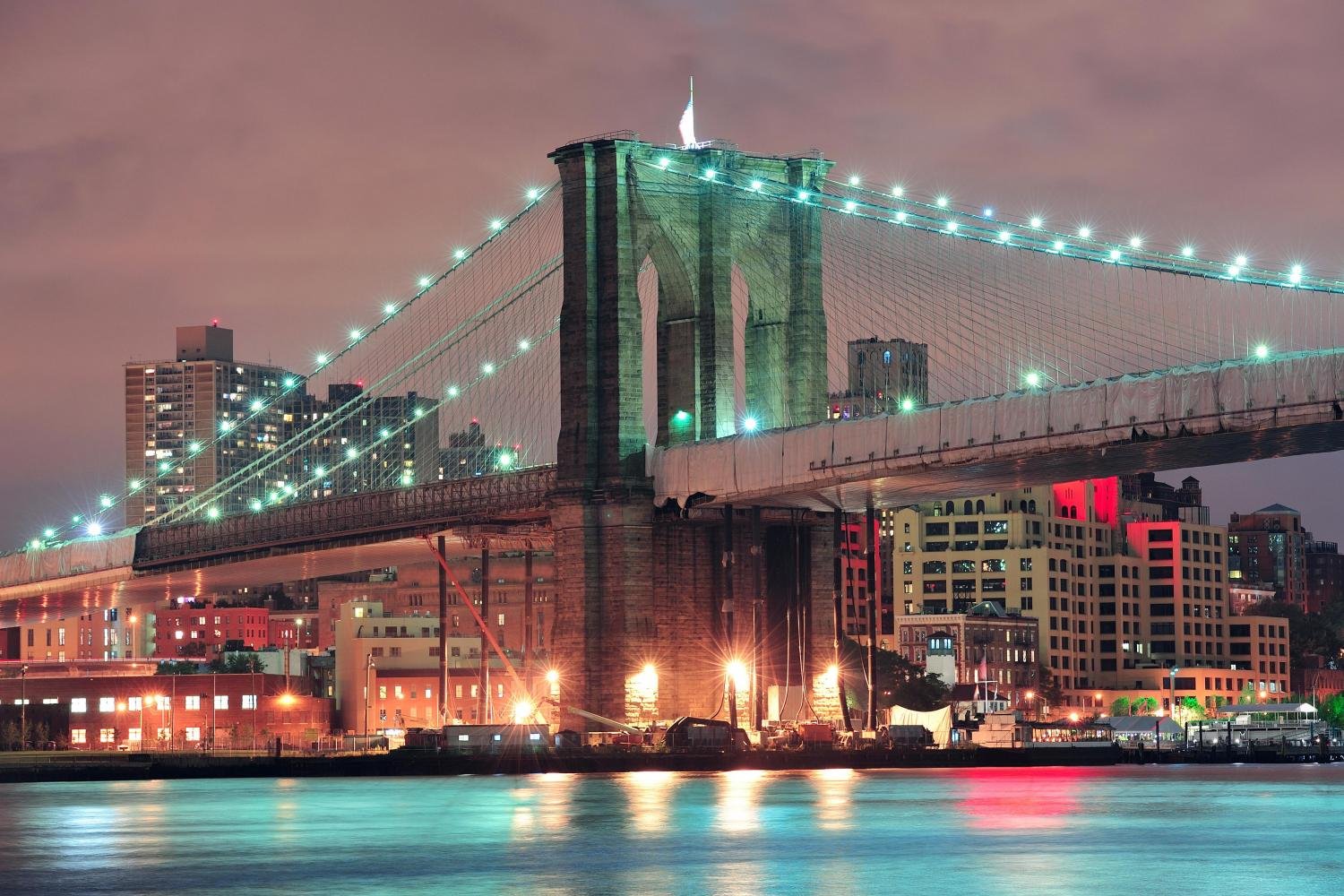