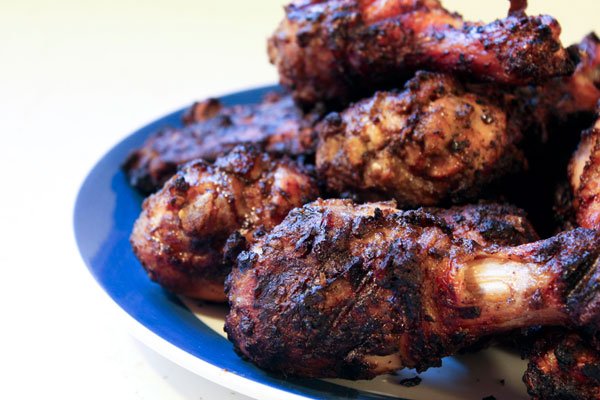 Curry was brought to Jamaica by Indian immigrants and was quickly adopted by Jamaicans. Curry is used in many of Jamaica’s most popular foods, which include curry chicken, curry goat and curry shrimp.

Dumpling is dough that is either fried or fried.

Jerk is a seasoning that existed since the first inhabitants of Jamaica settled on the island. Some of the most popular jerk dishes include jerk chicken and jerk pork.

Manish water is considered by many local Jamaicans to be an aphrodisiac. It is a broth consisting of various parts of a goat (the head, the testicles and legs) cooked with green banana and seasoned with pepper and sometimes rum

Oxtail consists of ox tail cooked for a long period until it is tender.

Rice and peas is probably the most commonly served staple served with any main dish. Rice and peas consists of rice and kidney beans cooked in coconut milk and other seasoning.

Starches are a very popular part of a Jamaican meal. The most common starches are rice, yam, cassava, breadfruit, fried plantain and dumpling (fried or boiled balls of flour)

Saltfish, as the name suggests is fish, typically codfish that has been preserved with a large amount of salt. Although the fish could easily be refrigerated, the salt provides the extra taste