Whoever says that the largest carnival in the world is the one in Rio in Brasil has never been to the Trinidad carnival. The Trinidad carnival is gigantic. As the Carnival approaches, during the months before the carnival, the entire island of Trinidad is surrounded by Carnival fever. There is an entire season dedicated to Carnival with various fetes and parties throughout the island. The number of parties continue to grow as the carnival approaches and we get closer to Mardi gras. There is no denying it, people love to party in Trinidad and Tobago.

The carnival plays a huge part in Trinidad’s cultural identity. It is the largest annual cultural and artistic event that takes place in Trinidad. The carnival, by itself defines all that Trinidad has to offer in terms of spectacle and musical performance. There are literally months of preparation work that goes on for this grand spectacle, particularly for the various bands that play mas.

Preparations for the Carnival

Preparations for the next carnival begins pretty much as soon as the current Carnival finishes, which is on ashe Wednesday. The carnival begin preparations with brainstorming sessions to decide on the theme for the next carnival. These themes are often varied and change every year. Themes include everything from cultural folklore, island mythology, exotic voyages, science fiction and pretty much anything else you can think of. With the selection of a theme, the colors that match the theme must also be selected before the costume designs can begin.

Once the theme has been selected and research on the theme has been done, each carnival band goes to their mas camp to begin designing and styling the various costumes that will illustrate their theme. The most important costume that needs to be designed are the costumes of the king and queen of the carnival. As Dimanche Gras approaches – the day where the king and queen of the carnival will be selected, each band works feverishly around the clock to get all the details in place for the king and queen costumes. Designers work day and night to ensure that all the feathers, pearls and other aspects of the costume are exactly as designed. The designers also work hard on preparing the costumers of the other members of the band who have purchased their costumes from the band. And for the next couple of days, hundreds of costumes will be designed by these bands.

The actual carnival festivities begin with the selection of the king and queen of the Carnival, which takes place on the Sunday before Mardi Gras. This is also the final day of competition for the Calypso king. On the night of Sunday to Monday, at 2AM in the morning starts the J’Ouvert celebrations. Everybody in Port of Spain takes to the streets for a gigantic party that will only finish of the following Wednesday. During J’ouvert, the attitude is to have a good time and get dirty. You will get dirty and everyone around you will get dirty. Either by dirt or by paint or oil. Doing so transforms you to the “blue devil” and you are ready to play the “dirty mas”. 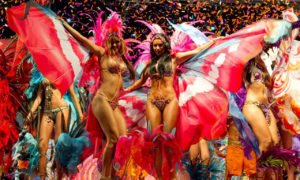