The Trinidad and Tobago Travel Guide

Trinidad is completely different from the other Caribbean islands, which is part of its charm and appeal. Trinidad is the birthplace of calypso music, steel-drum music, and the limbo. The island is very multicultural and offers more ethnic diversity than any other island in the southern Caribbean. There is always something going on in Trinidad. Tobago, its sister island, offers a more laid back and relaxed atmosphere. Through the years, immigrants from almost every corner of the world have come to Tobago, making it a fascinating mixture of cultures, races, and creeds just like Trinidad. This travel guide will explore all there is to know about visiting Trinidad and Tobago.

Although Trinidad is best known as the home and heart of West Indian Carnival, the nation also has one of the most diverse and absorbing society in the region. Unlike many other Caribbean islands, Trinidad and Tobago is not known of its Tourism. Although T&T has plenty of sandy beaches backed by palm trees, Trinidad and Tobago attracts a variety of visitors interested in wildlife, nature and the island’s rich culture. This includes a rich musical and culinary culture. Trinidad and Tobago is a nation blessed with an abundance of distinctive flora and fauna but it is also blessed with a unique and virbrant annual festival known as Carnival.

The People of Trinidad and Tobago

What sets Trinidad and Tobago apart from other Caribbean islands are their people. The people are part of the attraction of Trinidad. This tiny island is the most cosmopolitan island in the Caribbean. The island’s eclectic mixture of ethnicities includes Syrians, Chinese, Americans, Europeans, East Indians, Parsees, Madrasis, Venezuelans, and the last of the original Amerindian settlers of the island. You’ll also find Hindustanis, Javanese, Lebanese, African descendants, and Creole mixes. The main religions are Christianity, Hinduism, and Islam. In all, there are about 1.2 million inhabitants, whose language is English, although you may also hear the local dialect, Trinibagianese. 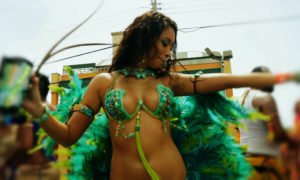