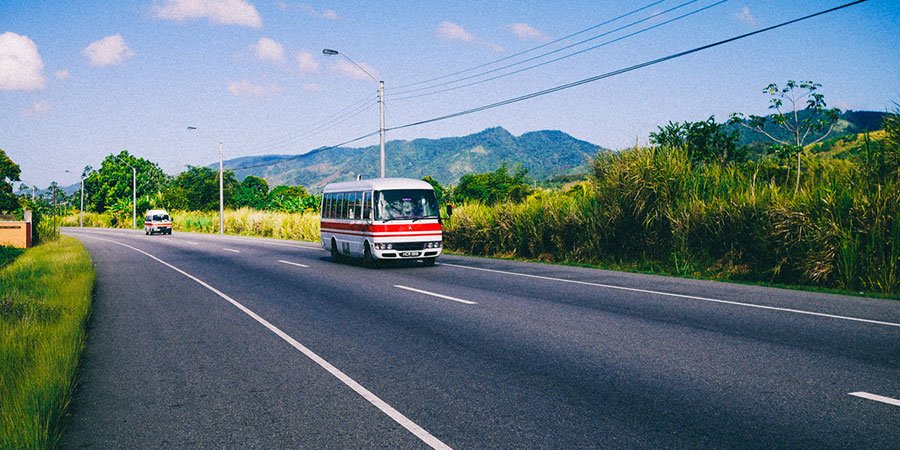 In Trinidad and Tobago, driving is on the left and road signs are based on the English system. Gas stations can be hard to find outside urban areas so keep the tank full. Car rental starts at around US$40 per day.

In order to travel around Trinidad and Tobago, you will need to be patient. Public transportation on both islands is minimal, so a privately run system of route taxis, maxi taxis and regular taxis fill the gaps. If you want to see more than the urban areas, you will need to rent a car.

Getting around By bus

Though bus services have improved in recent years, particularly in Port of Spain, public transport remains erratic, with most buses clustered around peak hours. Tickets must be bought in advance from the Port of Spain and Scarborough bus terminals or from small general stores around the country. All buses in Trinidad leave and terminate at City Gate/South Quay in Port of Spain. In Tobago, all buses depart from the terminal on Greenside Street in Scarborough

Getting around By car

In Trinidad and Tobago, driving is on the left and road signs are based on the English system. Gas stations can be hard to find outside urban areas so keep the tank full. Car rental starts at around US$40 per day. Thrifty is the only major international chain on both islands, though there are many local firms. All car rental companies require you to be 25 or over, to have held a driving license for a minimum of two years and require a credit card imprint.

Getting around By maxi taxi

Maxi taxis are private minibuses that carry ten to twenty people and have set routes and standardized fares (between TT$2–10 depending on the distance) but no set schedule. An entertaining experience for the decor, music and conversation, maxis have color-coded stripes along the side of the vehicle relating to the area in which they work. Yellow-band (Port of Spain and the west), red (east) and green (central and south) commute between Port of Spain and outlying towns, while black (Princes Town), brown (San Fernando to the southwest peninsula) and blue (Tobago) work within their own areas. Routes radiate from main centers; you can board anywhere – just stick out your hand to be picked up.

Getting around By taxi

Within Port of Spain, the route taxi is the most popular mode of public transportation. Official taxis have an ‘H’ (hired) on their license plate. Occasionally, drivers of private vehicles (with ‘P’ on the license plate) also offer route-taxi service, though its best to be familiar with the driver or know they are legit before hopping in. Route taxis follow the rules as maxi taxis, but take a maximum of five passengers and are slightly more expensive. Always agree on the price in advance.

Going from Island to Island

There are two ways to travel between Trinidad and Tobago. By sea, there’s a fast catamaran (TT$50 one-way, 2.5hr) and a regular ferry (TT$37.50; 5–6hr) between Port of Spain and Scarborough.