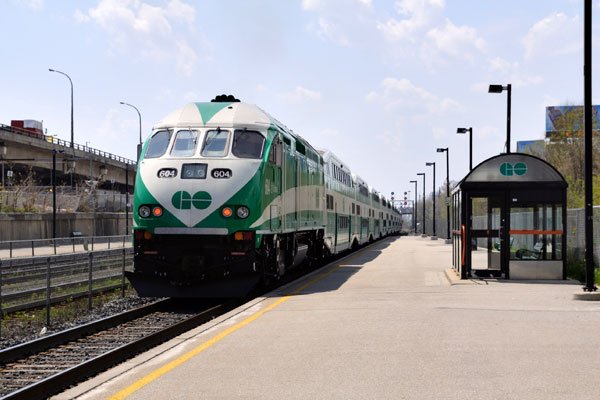 GO Transit runs the commuter transit in the Greater Toronto Area (GTA) linking Toronto with the surrounding regions of the GTA and carrying more than 50 million passengers a year. The Greater Toronto Area consists of the City of Toronto and the surrounding Regions of Halton, Peel, York, and Durham. GO Transit also serves the neighbouring City of Hamilton. GO Transit connects with every municipal transit system in the Greater Toronto and Hamilton areas, including the Toronto Transit Commission (TTC). They provide both bus and train services that mostly run during rush hour. 57 million commuters use GO Transit annually.

The GO Transit vehicles are all a distinctive green and white colour, and their 2-level commuter railcars have been in use since 1978. It was begun in 1967, and today covers 90% of operating costs through transit fares. Transit users must pay their fare with either exact change, tickets (sold in books of 10), or show a monthly bus pass. The GO Transit service is most frequent during the “rush hour” with service on many routes through the day and into the evenings. Information about GO Transit is available by phone 24 hours a day. In the Toronto local calling area 416-869-3200 or Long distance toll-free 1-888-GET ON GO (438.6646).

If you wish to ride the GO Transit train, you need to purchase your tickets in advance – you cannot purchase tickets ON the train.

GO Transit includes trains and buses that travel around the Greater Toronto Area (GTA) and to cities around and just outside of the GTA. You can buy day passes and tickets at stations across the city. Riders are charged according to the distance traveled. Keep your ticket and day pass when riding as proof of payment.

The following is a map of the GO Tansit network, courtesy of the GO network. 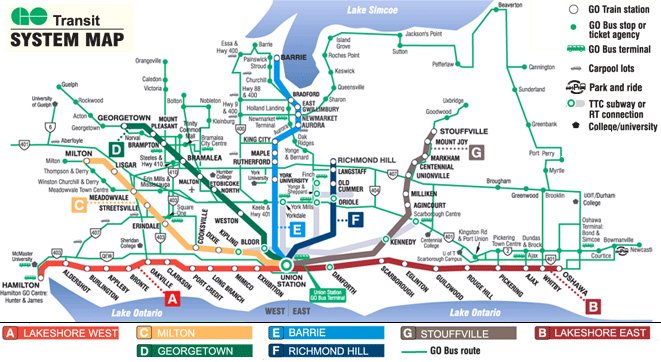