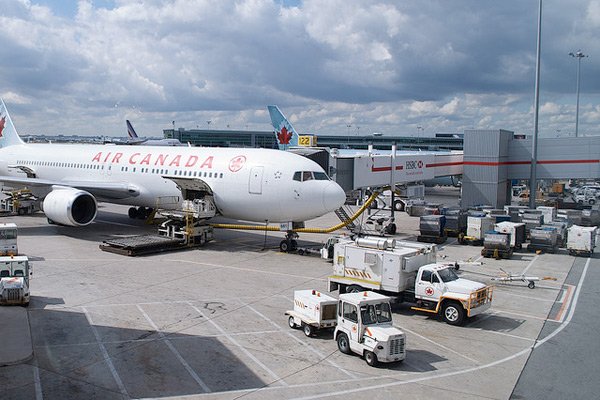 Air travel is the fastest and most convenient way to get to Toronto. Canada has two major airline companies: Air Canada and WestJet. Both of these carriers offer vaious non-stop flights into Toronto from many of Canada’s most popular cities. There are also several international carriers that offer flights from the United States, Europe, Asia and Australia.

The Pearson International Airport is 27 kilometers west of the city of Toronto, which is about half an hour drive from downtown. Pearson is the largest and busiest airport in Canada. The airport also goes by the names Lester B. Pearson International Airport or simply Toronto Pearson. The airport is named in honour of the late Canadian Prime Minister and Nobel Peace Prize winner Lester Bowles Pearson.

The Billy Bishop Toronto City Airport is just a short ferry ride from Toronto’s shores and less than a couple minutes from Union Station by taxi or streetcar. It is named after Air Marshal Billy Bishop, a Canadian First World War flying ace. As of 2010, it was Canada’s 14th busiest airport and Ontario’s 3rd busiest airport by passengers and the 17th busiest Canadian airport in terms of aircraft movements.

Getting to Toronto from the Pearson International Airport

Most of these car rental companies provide maps and detailed directions on how to get to Toronto from the airport. If you are not driving, then there are still plenty of options. Many hotels provide shuttle service to/from the airport. Another option is to find a taxi or airport limousine. The average cost of getting into Toronto is approximately $50.

The Airport Express is a comfortable, yet frugal luxury bus service that connects Toronto Pearson to downtown Toronto. Each one of these buses boasts leather seats and en-route Wi-Fi capability, with direct service to seven downtown hotels as well as the University of Toronto campus. The Airport Express costs $12.95 one-way, $36.25 round-trip, and runs every 20 to 30 minutes between 4am and 1am. You can get more information about the service by visiting torontoairportexpress.com

Getting to Toronto by Toronto’s Transit System (TTC )

You can also get to Toronto using the TTC, Toronto’s transit system. To do so, you can take the 192 Airport Rocket to Kipling Station or the 58A Malton to Lawrence Station, where you can connect to the subway line servicing the downtown core. Both options operate every 45 minutes.